On a recent trip to say au revoir to a close friend, we visited Bath’s eponymous Roman Baths. This was originally a Celtic temple to the goddess Sulis, who the Romans, when they came marching in the first century AD, reinterpreted as Minerva the owl goddess of wisdom. But what I like about bath complexes is that they seem to have taken in so many parts of everyday Roman life: cleaning, healing, relaxation, socialising, worship, gossip, curses and prayers. Hundreds of tablets carved with curses have been found in the waters, and in many of them the writer is cursing whoever stole his clothes when he was bathing – for me this sums up the baths’ unique combination of the mystic and mundane.

What lies beneath the ruins is just as interesting. There is a very well preserved hypocaust system, which would have kept Roman toes toasty. I always think it’s a shame these were hidden away under the floor, as they look so impressive. 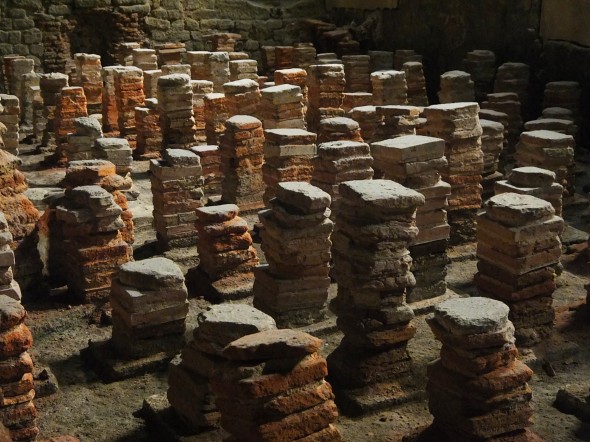 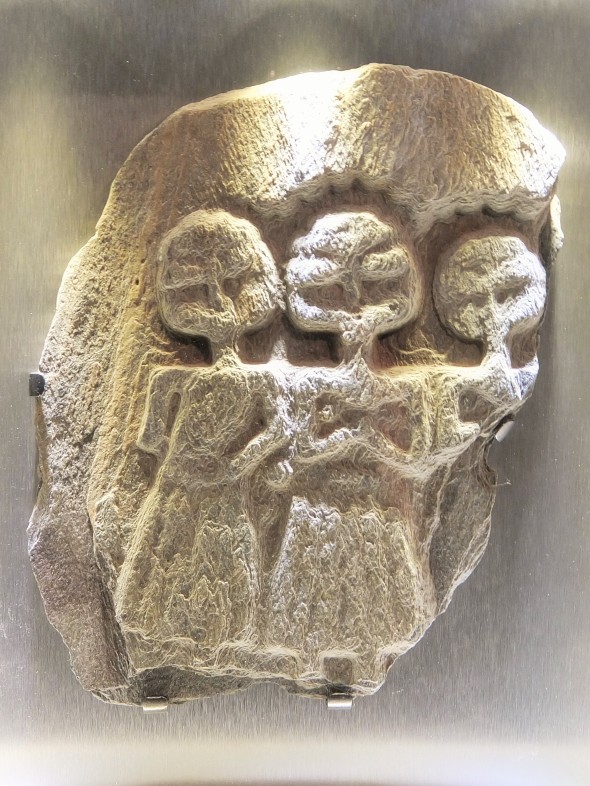 Of all the things in the museum of objects found at the baths, this tablet with what looks like three female figures on it was my favourite – but I can’t remember a thing about it. (Alright, we had been to the pub.) Perhaps they are priestesses? I like their coiled-up hair.

The building which provides a shell for the ruins is eighteenth century, not Roman, but I did like this little ornamental elephant head on the upper wall.

I can’t claim to know any more about Roman culture than can be found in the well-thumbed pages of my Rotten Romans (I owe Horrible Histories so much). But I do know gorgeous colours when I see them – glorious how the hazy cerulean water contrasts with that mild obsession of mine, the creamy Bath stone. 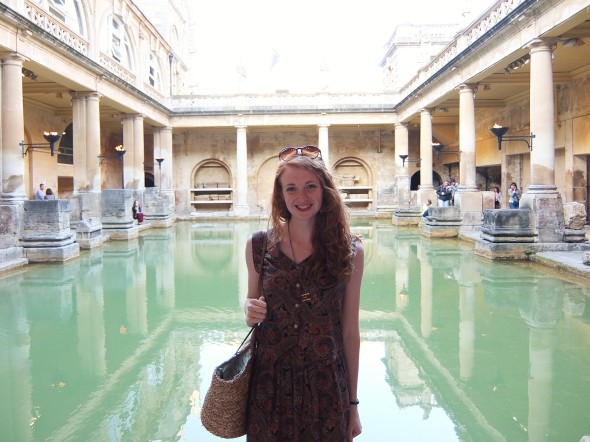 p.s. A quick note about the tapestry two-piece I am wearing – my friend Antonia spotted it in a charity shop and knew I’d love it, for which I cannot thank her enough!

Like Loading...
03 Sep This entry was published on 3 September 2014 at 8:38 pm. It’s filed under old stones, secondhand and tagged ancient history, architecture, bath, history, roman, vintage. Bookmark the permalink. Follow any comments here with the RSS feed for this post.

One thought on “aquae sulis | roman baths at bath”